“Chemistry is the study of matter, but I prefer to see it as the study of change. It’s growth, then decay, then transformation. It is fascinating, really” – Walter White, Breaking Bad

These were the prophetic words spoken by a then-chemistry teacher Walter White to his students. It preceded his lung cancer diagnosis and subsequent leap into the world of crystal meth cooking to fund the treatment. He went about this new line of work under the pseudonym ‘Heisenberg’, which became the catalyst for his inner transformation.

What was particularly fascinating about this character study was that the metamorphosis was never linear. As the Heisenberg persona gradually grew more ambitious and colder, we were still able to catch glimpses of the mild-mannered Walt of old. Although he underwent too much of a transformation to ever fully return to his former self.

Much like Walt, Seoul has undergone its own dramatic changes. It too has hustled its way to notoriety, leaving casualties strewn along its bloody path in a concentrated effort to recoup lost wealth and status, battling back against all odds to become a major player on the world stage.

Neighborhoods here put their best faces forward; Myeong-dong is the hip shopping mecca, Bukchon has traditionally trendy homes, whilst Gangnam has nightclubs, restaurants and most characteristically of all, plastic surgery clinics. 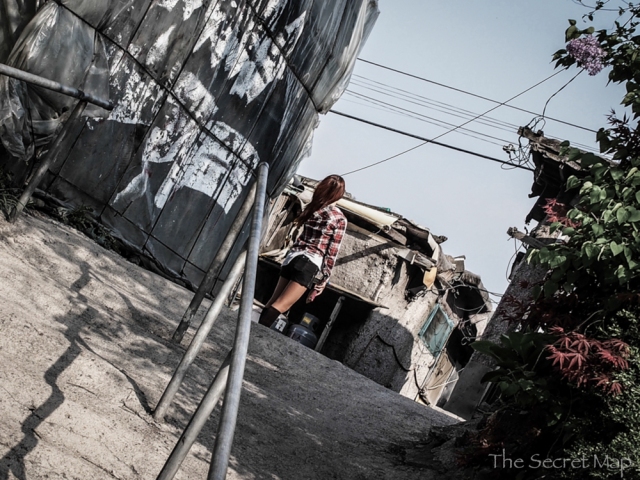 Stepping off a bus within the Gangnam district limits is the village of Guryong. No chic cafes or nightclubs are found here though. Coal heating is standard whilst toilets comprise of communal, terraced outhouses with nothing more than a hole in the floor – It’s a shanty town. In the race to modernize during for ’88 Olympics, Guryong got left on the starting blocks. The people here were swept aside during the rest of Gangnam’s meteoric rise to power. 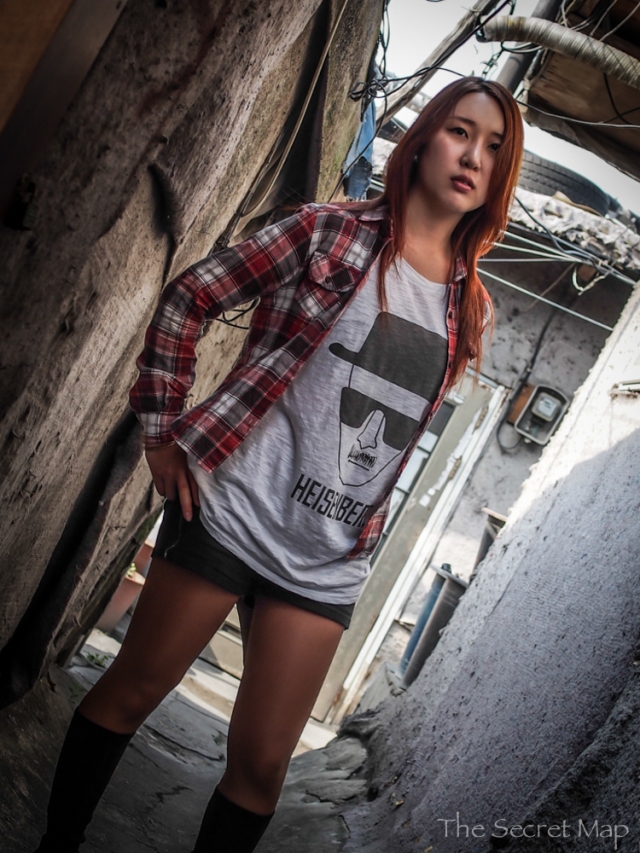 Insulation is draped across shacks made of wood and metal, which give way to cracked paving stones that twist labyrinthine paths through the village. Laundry is hung in walkways alongside shoe racks, cupboards and refrigerators.

You meet people like ‘Mask’. His friends call him this because his face resembles a traditional Korean dance mask.

After acknowledging his leopard-print pants, he assured us that it’s his son who has the stylish gene. Mask Jr is studying to be a fashion designer in Paris but doesn’t know when or if he’ll return home. I promised to return with a print of his portrait.

A drone flies over the city’s latest face-lift.

Hundreds of millions of tax dollars have manifested themselves in the form of a modern monstrosity, or marvel, depending on whose eyes pass judgment.

This is the Heisenberg effect.

It’s not just the city that’s molding itself in the name of self-improvement. From the shiny faces on television dramas and music videos to endless skin care advertisements, the country is obsessed with the aesthetics of transformation; going under the knife is standard practice on the Peninsula.

A promise is a promise, so we returned soon after. 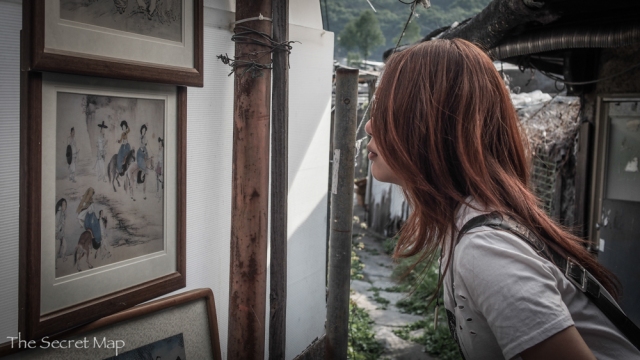 While not an idealized vision of rural harmony, Guryong has an organic rhythm incomparable to the burgeoning, ever-expanding concrete jungle of the surrounding metropolis.

The hodgepodge of tangled wires and strewn furniture lies in stark contrast to Gangnam’s polished shopping district. A local shopkeeper told us that our friend ‘Mask’ was out of the village that day, so we left his portrait with her and headed back.

It was then we saw a strikingly beautiful example of humanity.

Tiny, frail, yet spirited and dressed with panache. She was resilience personified. Like Mask, we stuck to a polite hello as we walked past her and her friends before they stopped us to ask why we were in Guryong.

Conversation led to introductions, to laughter and to a sense of connection helped by frequent Secret Map model Esther Jie’s bilingual charms.

Old folks are well aware of their status in Korea’s youth-obsessed society. Guryong’s shanty-dwelling residents know that their neighborhood is less than desirable. Luckily, the bashful lady’s friends talked her into having her portrait taken, on the promise that we’d come back again and deliver a print.

As our crowded subway cart snaked through the city’s grey, hazy, monotonous landscape, the thought of a return trip to Guryong was very appealing.

Mild-mannered Guryong is the Walter White to Seoul’s Heisenberg. It’s Humble and seemingly content to live within it’s means in the shadow of Gangnam’s high rises.

“I’m in the empire business”, said Mr. White in his Heisenberg state. Seoul is clearly in the empire business, and it’s ruthless ambition may soon be the demise of this village, with government inspectors being the ones that knock. Let’s hope the residents keep their negotiating skills sharp.

Update: We returned with not only a print, but a full page spread in a Korean Photography Magazine. She was close to tears with happiness and said we could come back to see her anytime we wanted. Unfortunately, as of summer 2015 the government announced  they were to demolish the neighborhood in favor of real estate development.

More Secret Map can be found at the Facebook page.

11 replies to “Guryong Village and the Heisenberg Effect”