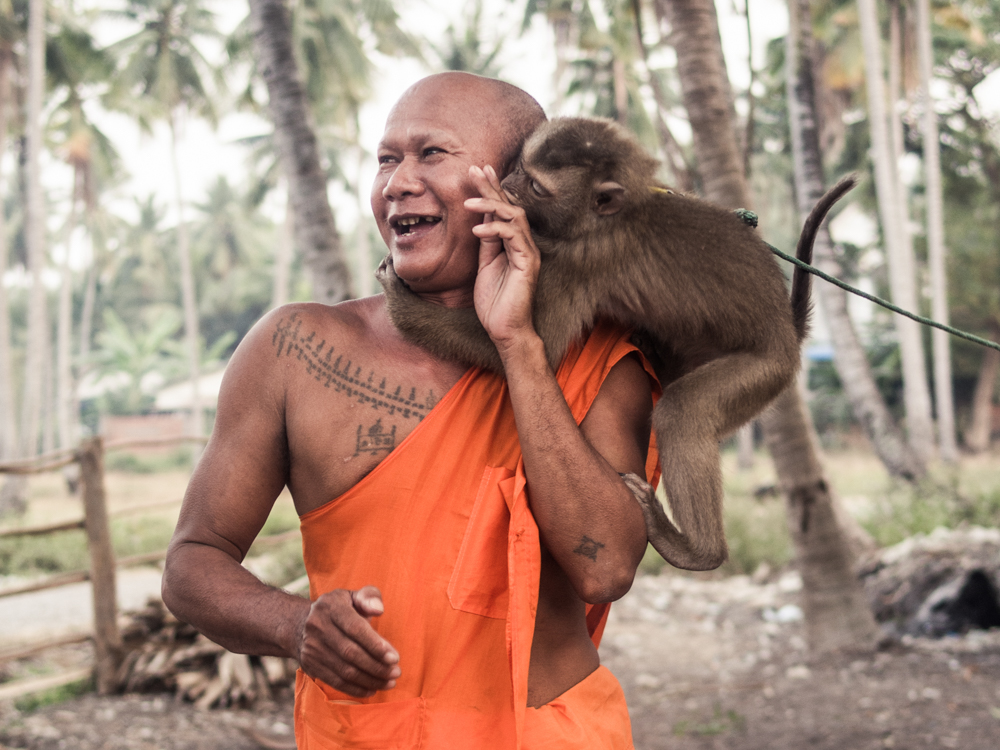 Why do we travel?

Is it to escape our daily routine? Perhaps it’s to see the world and how others live. Some of us travel for an extended holiday while others wish to challenge themselves by living economically along the road less traveled.

On a recent trip to Cambodia, I desired to do all of the above. I left with lighter pockets but felt richer in spirit.

Here are ten things I learned in the Cambodian school of life.

1. BE YOUR OWN GUIDE

However much pre-trip planning you’ve done, you’ll meet plenty of people along the way to help guide you. The best outcomes are usually the result of gut instinct.

Too many of travelers rush from A to B without stopping to smell the lotus flowers. Loosen your schedule and slow down. Things may not go to plan so learn from your mistakes or misfortunes – they will make you stronger and wiser.

In Battambang, my friend Chris and I were going to visit a killing field area when teh steep ticket price, coupled with amount of tourists heading there made us do a 180 degree turn and we found ourselves a few minutes later in a monk’s garden who had a playful pet monkey. No ticket required.

2. SHARE YOUR PASSION – At a guesthouse I met a young man named Jacob. Instead of the typical “What do you do?”, he asked “What’s your passion?”. I told him photography, he was into drawing and painting. When the guesthouse owners discovered our passions, Jacob was commissioned to design his first mural for them, while I was tasked to document the process.

Over the course of five weeks, I saw an incredible amount of creative talent emerge from people both individually and collaboratively. Showing your talent not only displays it to the world, but the sharing of it openly encourages you to up your game.

The merging of different crafts as people create together breeds new forms of expression This can create a ripple effect, inspiring others and even forming communities. Otres Beach on the south coast of Cambodia was one such community of artistically minded foreigners forging an alternative society for themselves outside of the ones made for them by society. “It’s like ‘The Beach’, said an Otres veteran, referring to Alex Garland’s novel.

Too many human interactions are fleeting and momentary. Whether it’s life or travel, we should always consider whether we are taking more than we’re giving.

My prime reason for going to Cambodia this time was to deliver a magazine to a girl I’d photographed two years prior. Her image featured in a travel article I wrote about Kampot.

Although I’d returned the same photograph as a print the first time around, she wasn’t that impressed (it was the colour isolation, I know it!), but when I returned with the magazine, her jaw hit the floor. Her friends and family were also excited but I think I may have been the happiest because of the sense of completion it gave me and how positive the reaction was. It also provided a portal into a community I wouldn’t have a reason to visit otherwise.

Of course, in Cambodia there many ways you can give your time, such as help to build a school, teach, volunteer for various cleanup projects, the list is endless. Returning a printed photograph is just the tip of the iceberg.

Some of you may have seen monks subverting the stereotype of purity and innocence in South East Asia. Whether it’s smoking or playing rap music from smartphones, some tourists are surprised to see behaviour that taints their idealized image of monkhood, while others decry it morally wrong.

Donning an orange robe doesn’t take away what’s underneath. Many of the young monks talk about girls, listen to rap, play fight and generally act their age. Boys will be boys, and the more you get to know them on an individual level, the less idealized your vision becomes.

Some people are kinder than others, some more innocent, others more corrupt. This applies whether you have an orange robe or a suit and tie, no matter how we present ourselves in public or on our social media profiles. We all have vices, so never be quick to judge someone else’s character without first being honest about your own.

Achieving a state of flow means clearing your mind of thoughts of past or future and focusing on the here and now. The gentle nature of Cambodians, the staggered beauty of their ravaged tropical landscape and the slower pace of life compared it’s more aggressively modernizing neighbour, Thailand, means that crossing into Cambodia is like entering a new realm of existence.

Spending time in Cambodia, where your everyday conveniences are stripped back and you aren’t so comfortable, shakes up your senses and makes you more alert. The developed world has people wrapped up in emotional cotton wool – we’ve become victims of comfort.

As Brad Pitt’s character Tyler Durden says in the film Fight Club: “The things you own end up owning you”. You won’t realize the truth of this statement until you relinquish, however briefly, the myriad of material accumulations you surrounded yourself with back home. The disregard of so many material possessions allows us to relax, be happier and embrace a more present state of mind. If there are still things that you miss after time away from them, you will value them even more in their absence.

If you’ve traveled to uncover more about a culture, a great way to satiate your curiosity is to directly approach people.

In Cambodia, I’ve seen countless tourists walking sheepishly around temples, Lonely Planet in hand, curiously staring at monks but often too shy to talk to them. The monks I’ve told about this have revealed that they too are shy because of their own relative social isolation, and more often than not, they’re unnecessarily worried about their English ability. Cambodian Monks tend to study foreign languages so there’s a good chance you’ll be able to strike up a conversation. In one temple I visited they even studied Korean.

We are each other’s curiosity, and once you approach someone and start asking questions, you will find they may be equally curious about your own life and culture.

One way to immerse yourself in the culture of a country is to learn about some of it’s history. In a place Cambodia, I would consider it essential, considering how impactful the Khmer Rouge-led genocide was.

The main victimsof the killing were the intelligentsia, thus when the Khmer Rouge was removed from power, Cambodia was not only financially poor, but intellectually – a burden the country is still suffering heavily from to this day. Contextual knowledge of your surroundings will allow yourself to see things with more understanding.

Gaining a new perspective from afar can allow you re-assess your own priorities and emotional attachments. Likewise, returning to a familiar place can give us ‘reverse culture shock’, a feeling that once-familiar surroundings can no longer be seen in the same light as before. Previous paradigms of reality can shift dramatically when relative to aspects of life you’ve witnessed in different cultures.

The place you once visited will not be the same place you return to. Everything changes. Nothing in the material world ever stays the same. To quote Chuck Palahniuk’s Fight Club character again: “Nothing is static. Everything is evolving. Everything is falling apart.”

Five years ago at Otres Beach, on Cambodia’s south coast, there was almost no development. Now it is a large community with long-term foreign residents mixed with short-term backpackers and flashpackers. It’s still retains a secluded charm, yet utopia’s inevitability of dystopia means that the population and prices in Otres will keep rising and the quaint little foreign enclave will transformed to something more soulless. But that’s OK – because there’s always a new version of ‘The Beach’ when the old one gets overrun. (2020 edit: dystopia is now in full effect)

Yet it’s not just the tourist enclaves, change is dramatically evident in Cambodia’s capital city of Phnom Penn, where the sizable ship of capitalism has dropped it’s heavy anchor. The city center’s shanty neighbourhoods have mostly been cleared for the development luxury malls, hotels and a new two million dollar mosque. Phnom Penh provides a fascinating contrast of this divide between rich and poor.

Instead of bemoaning and fighting the inevitable, we must accept that we have to make the most of what is in front of us in the present, because it might not be around in the future.

Walk barefoot in sand and listen to the music of the ocean. Explore forests. Soak in sunlight and observe a slow sunset, escaping the grey urban matrix we’ve constructed for ourselves.

After taking daily two hour walks along the beach in Otres, I was physically healthier and felt much of the stress formed from my previous city-dwelling lifestyle dissipate over time as I attuned to nature’s natural rhythms. Don’t just take my word for it, this observation is backed up by psychological research.

Spend time in more organic realms, this is where we belong. Relax, detach and still your restless mind. It will do you a world of good.

10.  UNDERSTAND LIFE IS DEFINED BY OPPOSITES

In developing nations such as Cambodia you are witness to stark contradictions. The sense of freedom you feel in a country with loose laws can also be the reason for it’s dangers. Foreign communities are appealing alternative societies, but in contrast to the surrounding local culture, they can can be seen as neo-colonialism. You can see this emerging on the beaches of the south coast (2020 update: especially now), but in Siem Reap, where the tourist dollar is king, the amount of foreigners have turned the place into Disneyland.

Despite a lack of decent infrastructure, the relatively simple lifestyle Cambodians have lived by is one of less worry and anxiety than the hyperactive status-driven countries of the West. People always comment how people in developing nations seem happier, despite having ;ess material wealth. The late rapper The Notorious B.I.G. talked about the accumulation of wealth breeding “Jealousy, envy and negative energy”. Philosopher Alain De Botton calls this Status Anxiety.

Traveling and living with less creature comforts for a while can put things in perspective about what are the true things in life that create joy. Negatively comparing yourself to your neighbour or your friends’ highlighted and carefully-presented social media lives will merely lead to feelings of inadequacy. Go hang out in the Cambodian countryside for a while instead.

Of course, there are many more lessons to learn. Visiting a country can provide much more than embracing an unfamiliar culture and environment – it may give you refreshed perspectives about the places and people back home, too.

Written and photographed by Simon Slater

For more Secret Map posts on Cambodia, there are Where the Buffalo Roam, Return to the Land of the Buffalo, and Journey of Life: A Cambodian Odyssey.