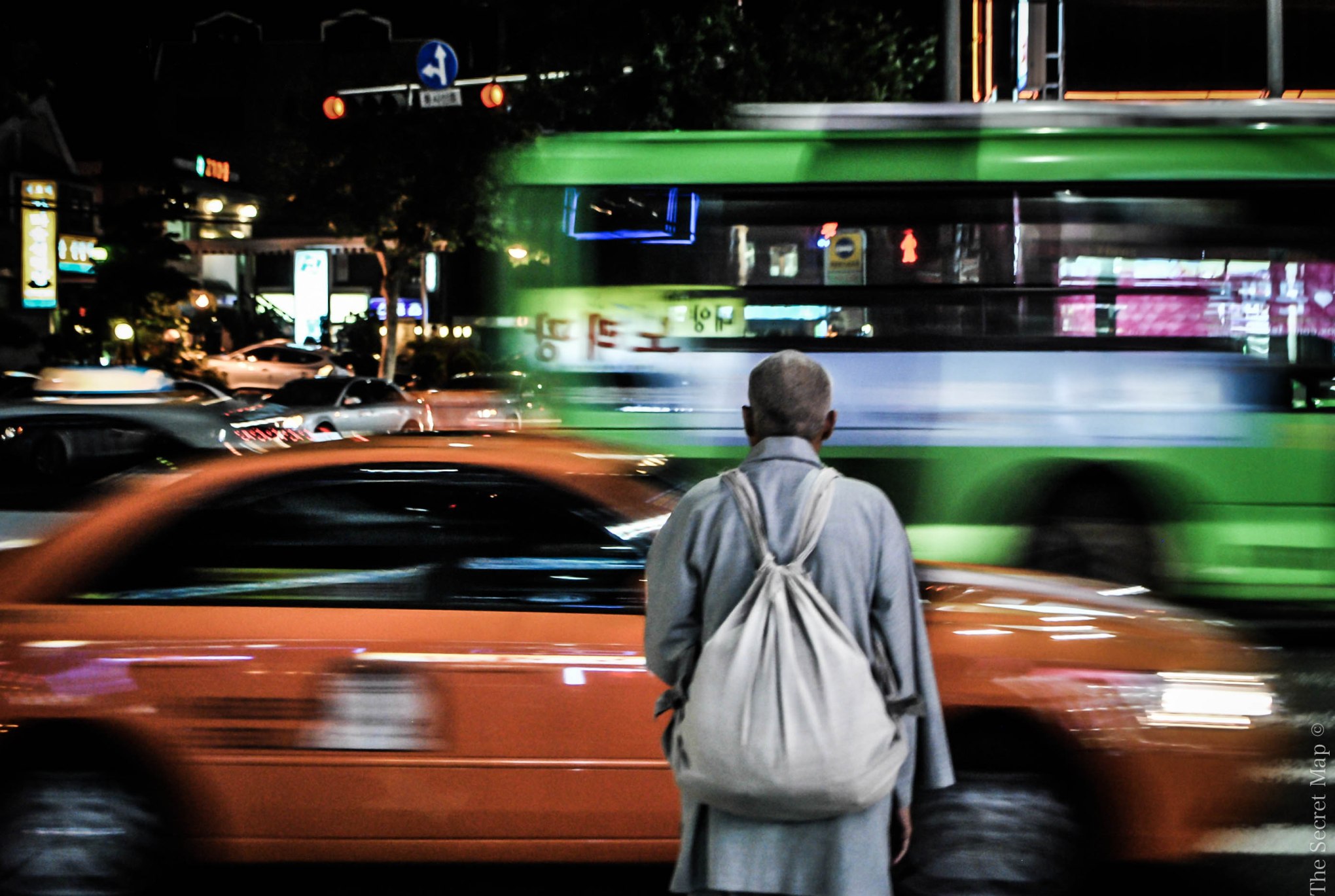 “A city isn’t so unlike a person. They both have the marks to show they have many stories to tell. They see many faces. They tear things down and make new again.”
― Rasmenia Massoud, Broken Abroad

Things move fast in Seoul. In a country that restructured a post-war economy with unrelenting haste, life in the big city can be exhausting. Hordes of commuters spill out of subway carts entranced in a smartphone hypnosis, subliminally bombarded by billboards telling them how or who to look like. 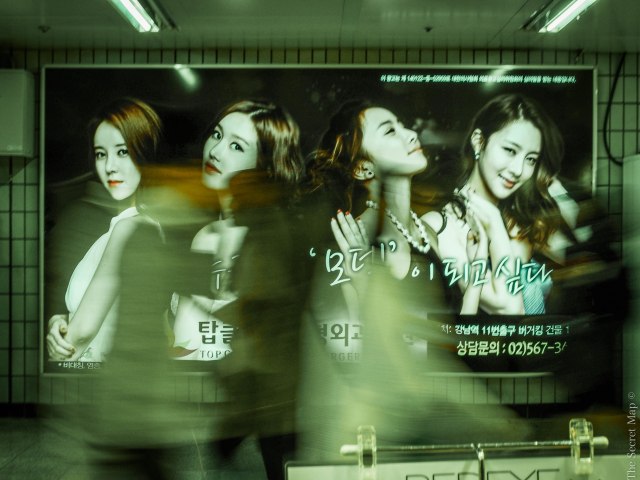 Metal chariots rally round corners in perpetual loops of fury, thundering into pit stops with an urgency mirroring the city’s meteoric rise to riches. 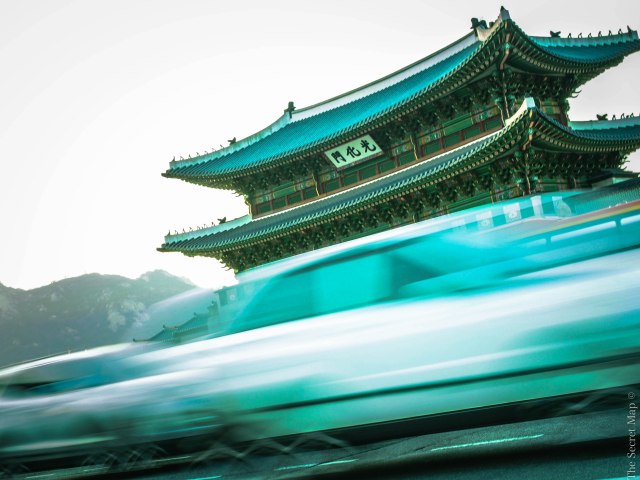 Like the faces of so many people here, iconic symbols like Gyeongbukgong Palace are revisions of the original. The main gate, like so many historic attractions in Korea, is a reconstruction of former grandeur. Material beauty needs maintenance, as the booming cosmetics and plastic surgery industry here attests to.

South Korea sprang to prominence in modern times out of a fiercely competitive spirit. “Fighting!” is another motto.

What Korea’s ubiquitous mirrors, direct comments on one another’s physical appearance and necessity of a resume photo all imply is that first impressions don’t just count – they can be a deal breaker. 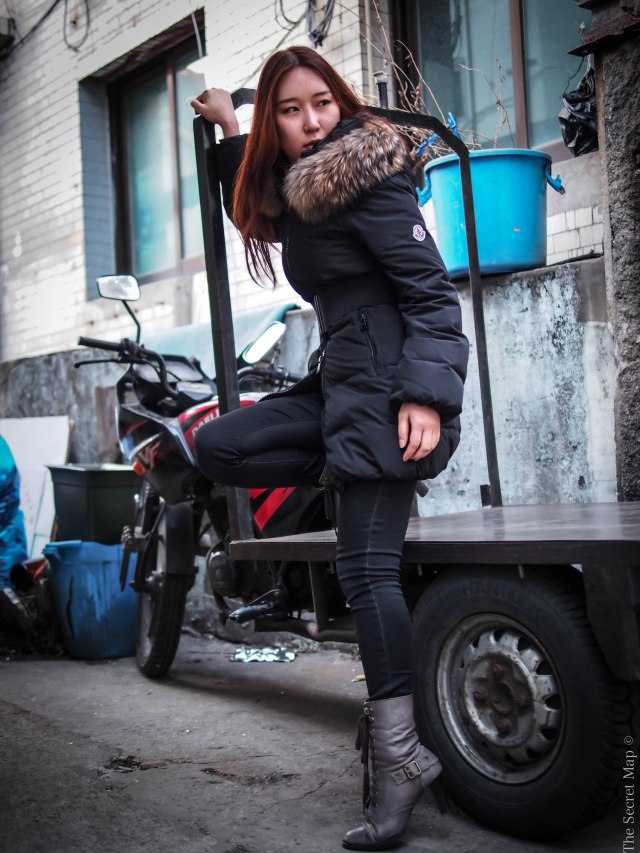 To get a true feel for this complex city, it helps to step away from the carnival and take a peek behind the curtain. To remove the city’s makeup and see the visible signs of graft and grit that cultivated such a bold and ambitious gal.

Seoul’s intertwining, weathered, rusting alleys can shed some light. The bygone-era feel of the lanes of Chungmuro aren’t consciously catering to the aesthetic sensibilities of passers by. They aren’t on a tourism map. The film studios of old have packed their bags and chased the Gangnam dream. Yet these hardy ventricles are part of a living entity that echo decades of productive endeavor igns of developmental modifications are seen everywhere. From the infusion of American culture and business models to the motorbikes here in Chungmuro, the evolution of the city has produced hybridity on every level of society. These custom-made bike/trailer mutations have sprung up all around the city but seem to be the exclusive transport of choice for the printers, whose shops dominate the landscape here. Evolving out of practical necessity, they are small enough to navigate the narrow lanes and fast enough to supply their goods around town with haste. 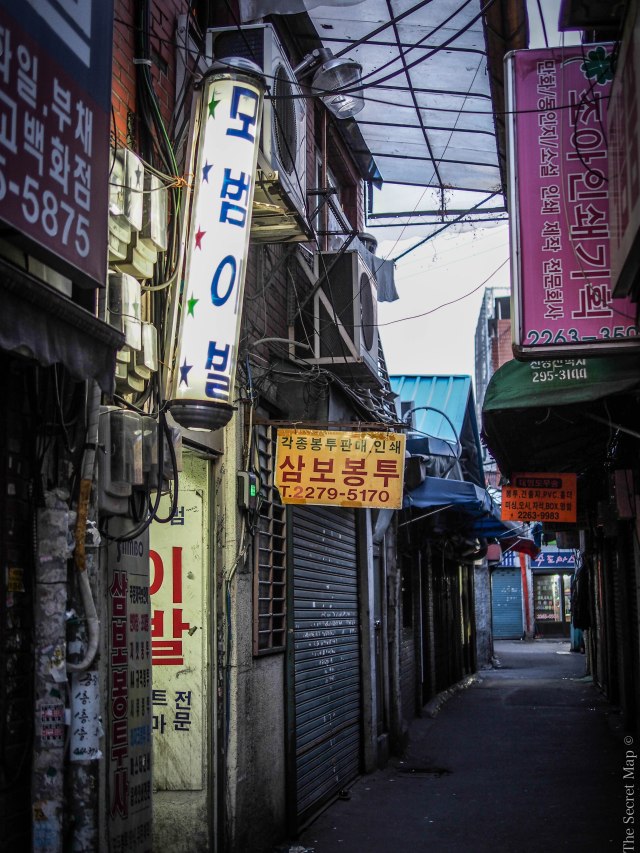 Beaming barber poles sprout from dimly-lit doorways like emerging buds after a harsh winter. To some, a sign of salvation, others, a monument to lost love. These poles echo the tales of a thousand adulterous men, some regulars, others merely ships passing the night.

The women within might tell you a tale of their importance in the country’s growth, of how they kept these same customers spirits high throughout the day.

The rotating batons may have been the beacons of hope to a hopeless existence under the iron fist of military rule. 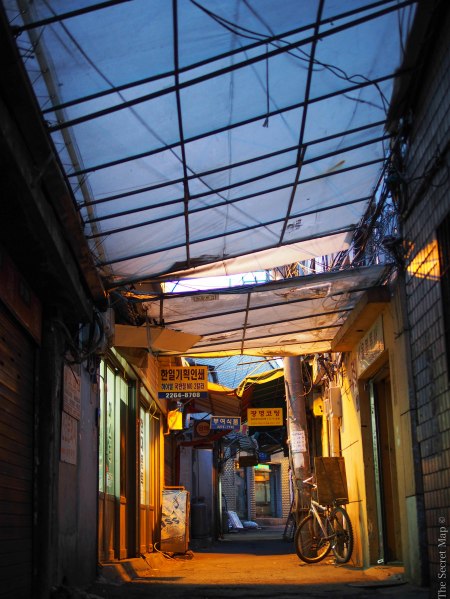 Seoul wears many unique and vibrant masks for her guests and hosts alike. Just like her people, desperate to put their best face forward, she also has her fair share of cracks and visible signs of struggle.

How the light enters the void can illuminate her essence. Here in the hidden alleys, where the fading natural light of dusk flirts with the artificial beams of print shop windows, lamps, and flickering neon of the alleys, is where the core of her hardy old soul shines true. 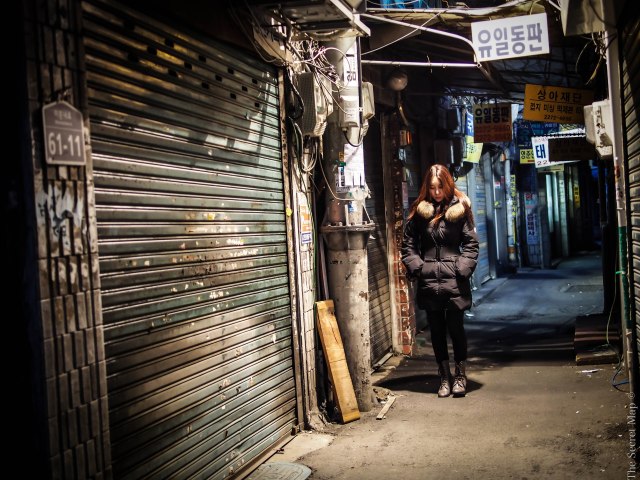 There’s beauty in her decay, and of course material beauty will eventually come to pass. A young girl, striding slowly twixt the fade and rust, sparks the scene into new life. Anything with a soul can be revived and resuscitated, regenerated anew like the city itself rising defiantly from the war-torn ashes. 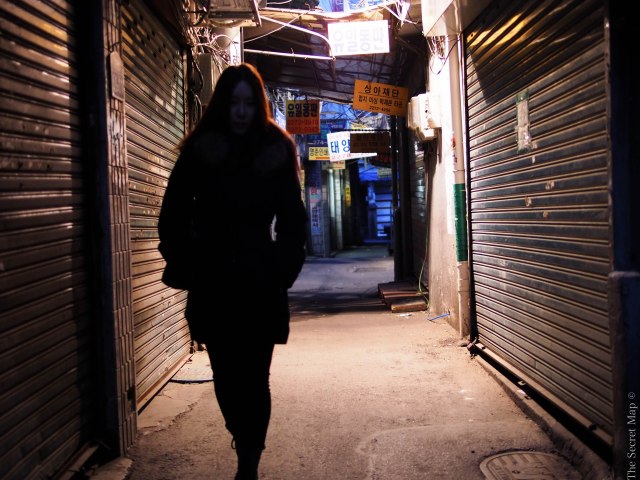 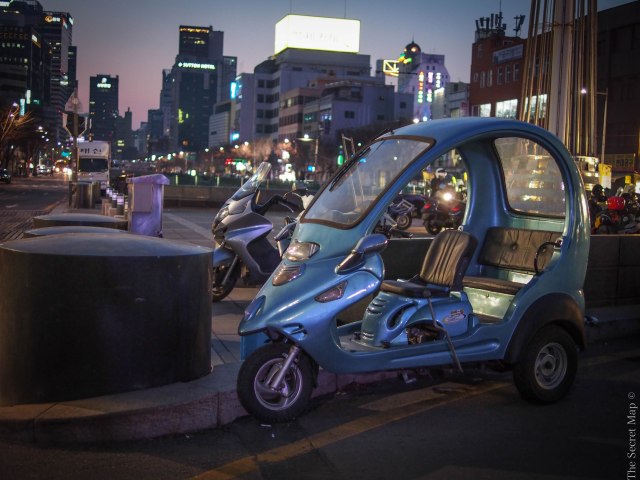 Emerging from the enclaves into the early evening night, modern Seoul reveals herself briefly. We cross over the Cheonggye, a river, a main vein of Seoul recovered from concrete highway obscurity. It’s revitalization wasn’t cheap, nor is it’s maintenance, but it’s now easier on the eye. This city has a propensity for changing faces. 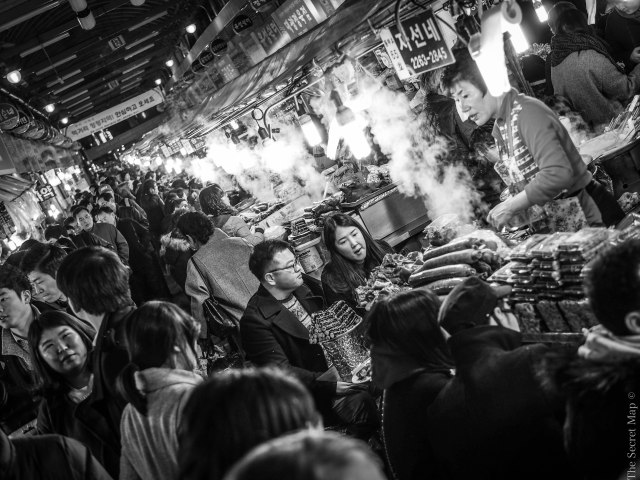 Now we flow into that most vital organ of Seoul, Gwang Jang Market, containing hundreds of steaming, crackling, open-air food stalls. The oldest remaining market in the country is serviced by that lifeblood, the backbone, the very heart of the nation: the Ajumma. These tenacious ladies have given their life for the nation, and, as familial bonds break apart, many of them aren’t going to be hanging their visor up any time soon. 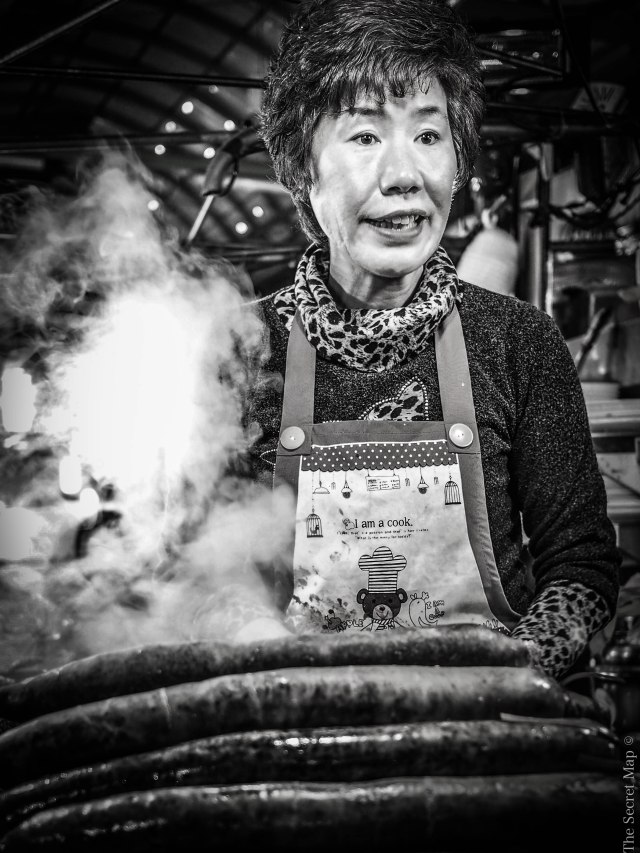 Heavily made-up with sometimes dyed, but always permed hair, the elderly women of Korea attempt to defy their own natural decay in their own way. The lady above, with her eyelid surgery and possible botox, showing that personal modifications aren’t merely for the young.

Divorce rate is increasing in Korea and business is always booming in Gwang Jang. Some of these old girls aren’t just frying up intestines, they’re looking for love. One person’s steel-elbowed subway nemesis is an ajjeossi’s potential mate.

Looking good behind a severed, hollowed-out pigs head or a steaming bowl of insect stew could be as appealing to an older gentleman as the basket wielding make-up girls of Myeong-dong to the androgynous, polished pretty boys that make up the young. 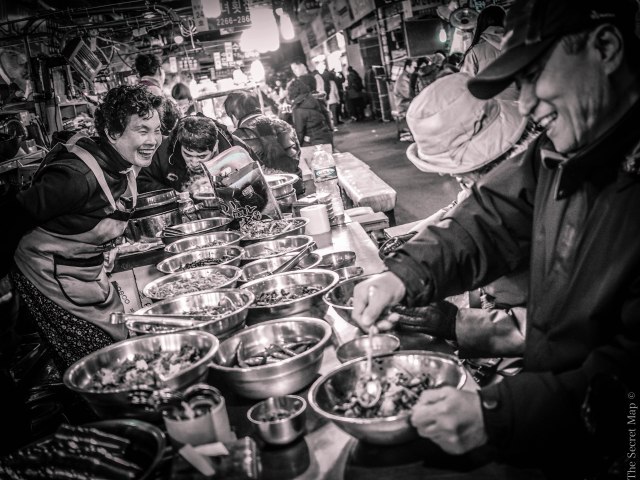 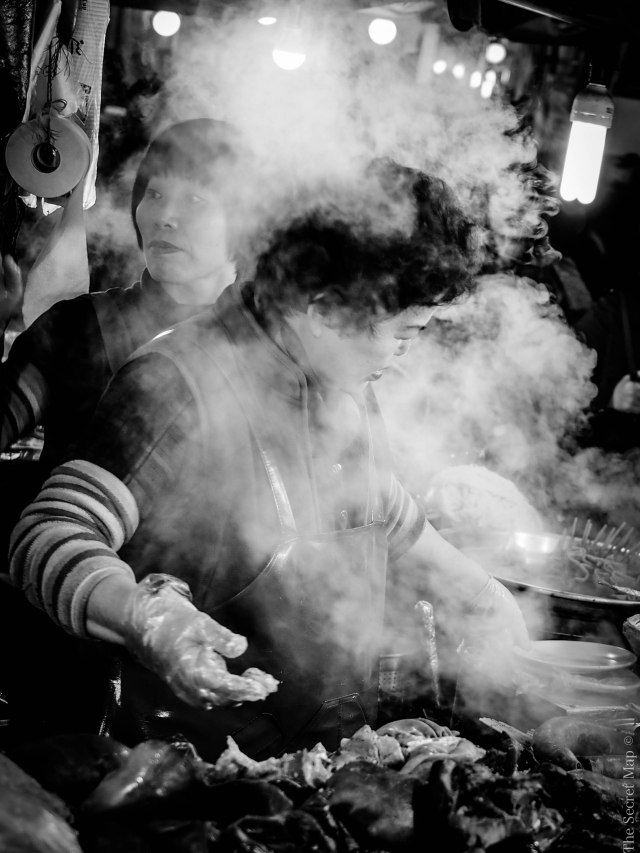 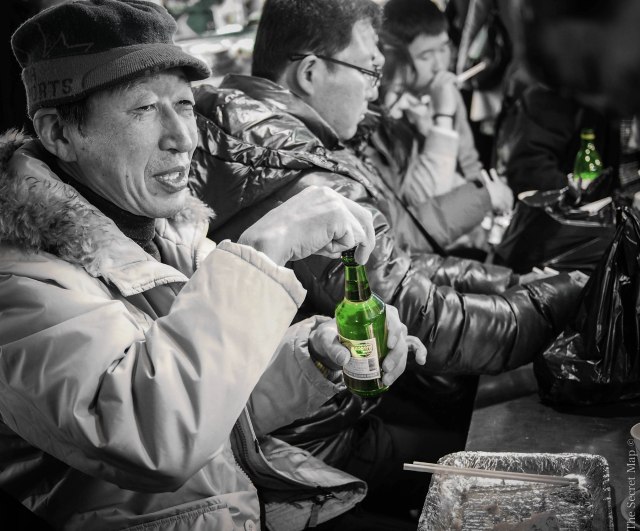 The green bottle that fuels them all: Soju encapsulates the “bali bali” quickly, quickly culture of which all Koreans are embedded. Quickly made, quickly drank; work hard, drink harder. Repeat.

In the race for modern civilization, the industrial age fired many nations off to a rapid, if clumsy start. Seoul’s the dark horse that just came from behind – soju, it’s rocket fuel. 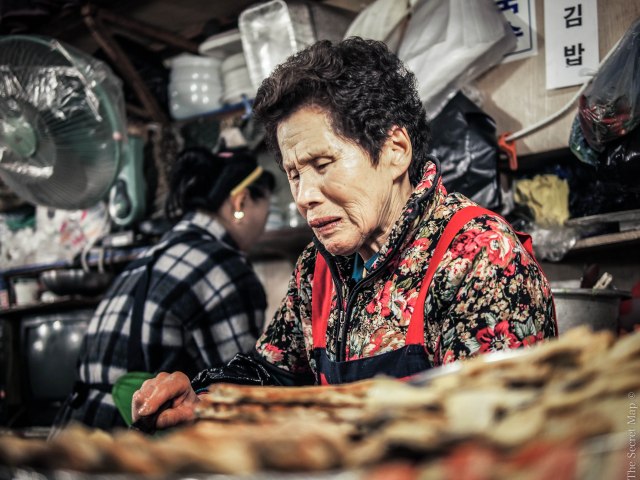 One of the oldest cooks, above, toils with her speciality pancake, a fusion of spinach and seafood. Her hardened, oily hands may barely feel pain these days, but the distinct, flawless nose amongst the tethered wrinkles of cheek and brow alludes to something deeper.

Is this yet another grizzled ajjuma who accepted her place in society, or did she aspire to be more than merely a producer of pancakes? Did her surgery facilitate past adventures? Romances? Business ventures? Or was she merely conforming to the standards being set for her, as the perm and floral print so often are an indication of. 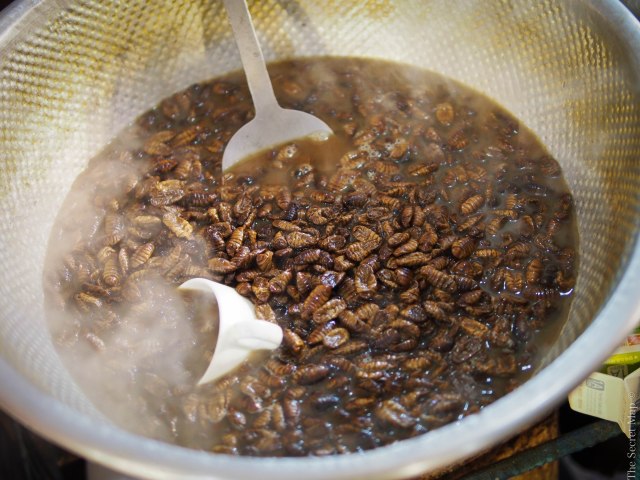 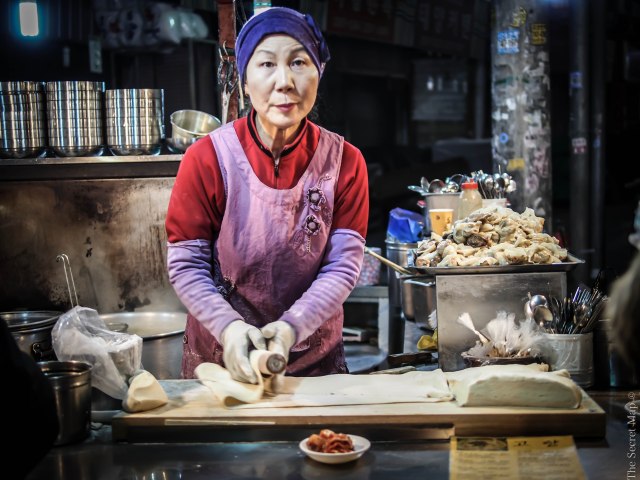 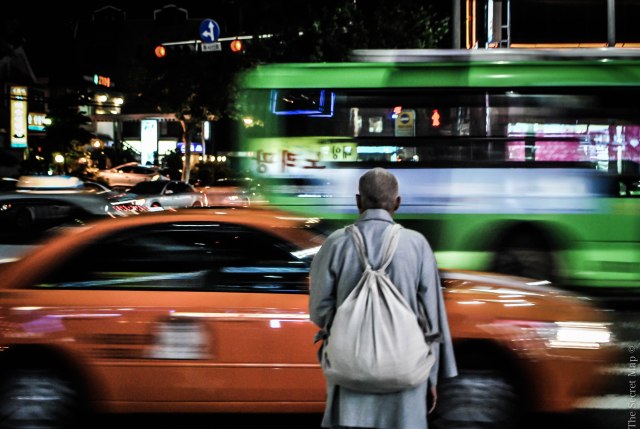 The chase of success and recognition here in Korea is not without casualties. The Chaebol-dominated ultra-competitive landscape, suicide rates, wide-scale depression and dehumanizing education system are all connected, and are all symptoms of a society trying to break the chains of it’s impoverished past. Eggs are being broken to make this omelet, and the discarded shells are barely being acknowledged before being swept away in pursuit of the task at hand.

To understand Korea’s urgency to succeed, and to explore the ways in which Seoul and her people have metamorphosed through constant and rapid adaptation is to gain a wider appreciation for a woman who isn’t going to drop her clothes for you after a few shots of soju. You need to play the long game.

To understand this city and her ambitions a little more is to comprehend her struggles, and if you haven’t been a part of that story, it will take time, apathy and ultimately, respect, to appreciate her for who she is, however briefly it may be.

She may never tell you the whole story, but that’s ok.

The mystery is alluring. 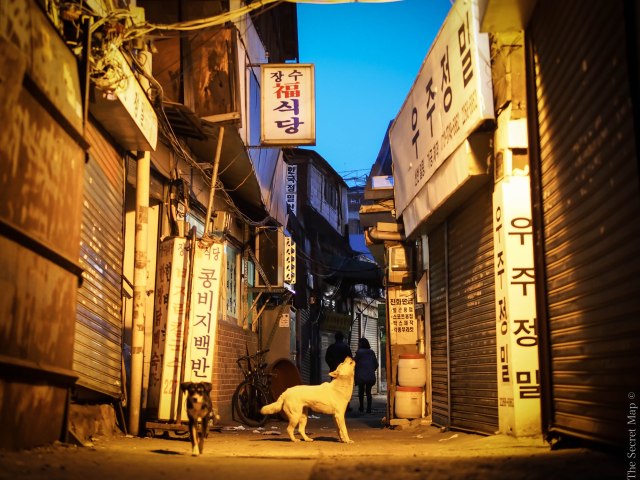 5 replies to “A Passage to Seoul”