Since I last visited the beautiful rural paradise of Kampot, Cambodia, one of my biggest desires was to return. I loved the nature and the feeling of freedom as I rode among the rice paddies and buffalo, and of course the warm greetings of people everywhere I went. Cambodians are renowned for their hospitable and friendly nature, and the continual wide smiles and shouts of “Hello wassyourname?” always warms my heart and fills me with positive energy.

The thing I was most excited to do, however, was revisit a village close to Ganesha, the guesthouse I stayed at, to give a small gift to one of the young residents there. I wanted to find ‘Buffalo Girl’, who I took a photograph on my last visit.

As I parked my motorbike near the local mosque I was immediately surrounded by inquisitive village kids. This village in the countryside is far off the radar for most visitors so I was quite a novelty them.

I showed the picture of Buffalo Girl that I took two years ago to the kids and gradually built up an entourage taking me through gardens and washing areas until we arrived at her house. Sat scrubbing her clothes, she didn’t recognize me until I opened the copy of Busan Haps Magazine with her in it. Her jaw dropped to the floor and her eyes bulged. Success. 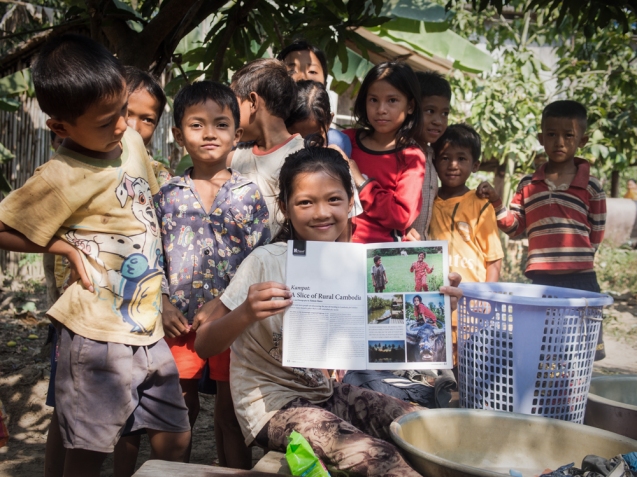 She was now a local celebrity, and it was so good to see her smile, since when I had returned with a print of the photo the time before didn’t seem to care. It must have been a surreal moment for Doray, as I learned was her name, a village girl living a simple life, suddenly a celebrity.

One of the biggest fans of the article was an elderly lady named Mai, who, with her crooked back but warm smile and kind eyes, hobbled along the courtyard and pushed her way past the kids to see it.

An American girl named Sarah who I’d brought along took a picture of us all in a state of total contentment. For that moment, all was right with the world. Worries past, present and future were swept firmly under the carpet. Sarah, on her first trip to Asia, was definitely in the midst of The Secret Map experience.

Doray and her friends and family let us hang out and take more shots, which became the primary means of communication. It’s moments like these that have made photography such an integral part of my, and many others’ travel experience. 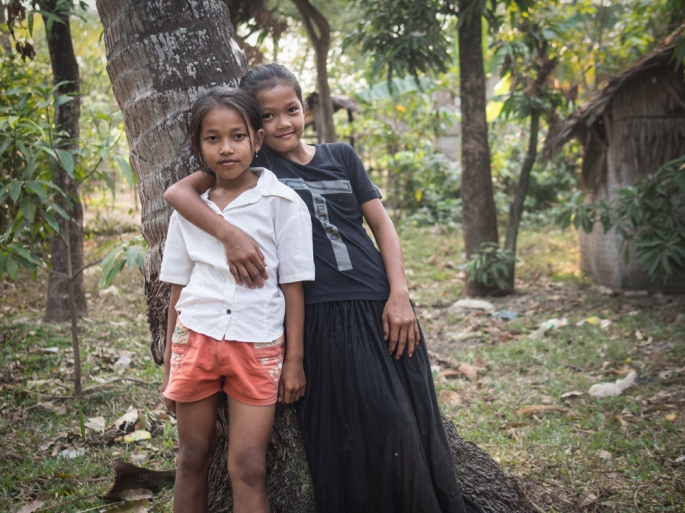 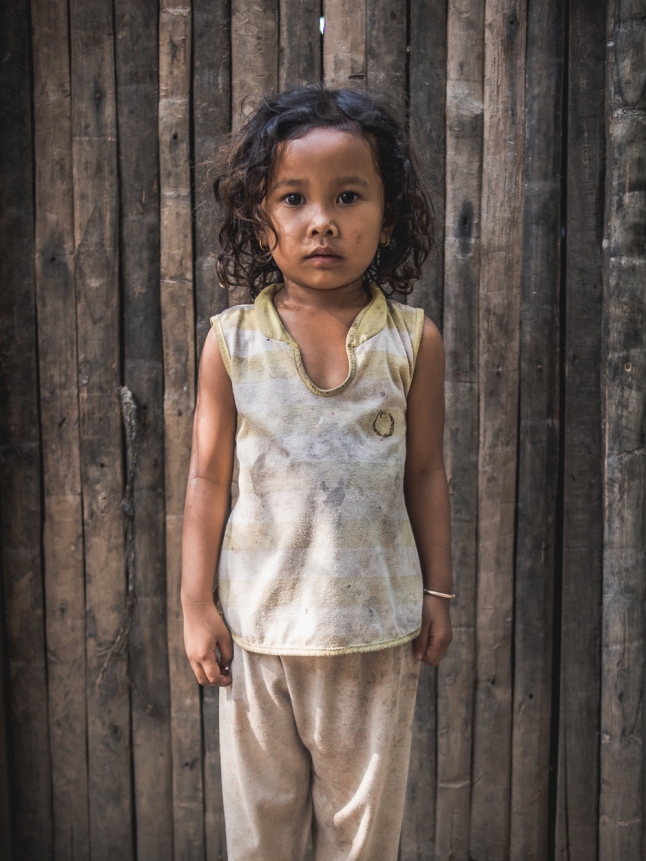 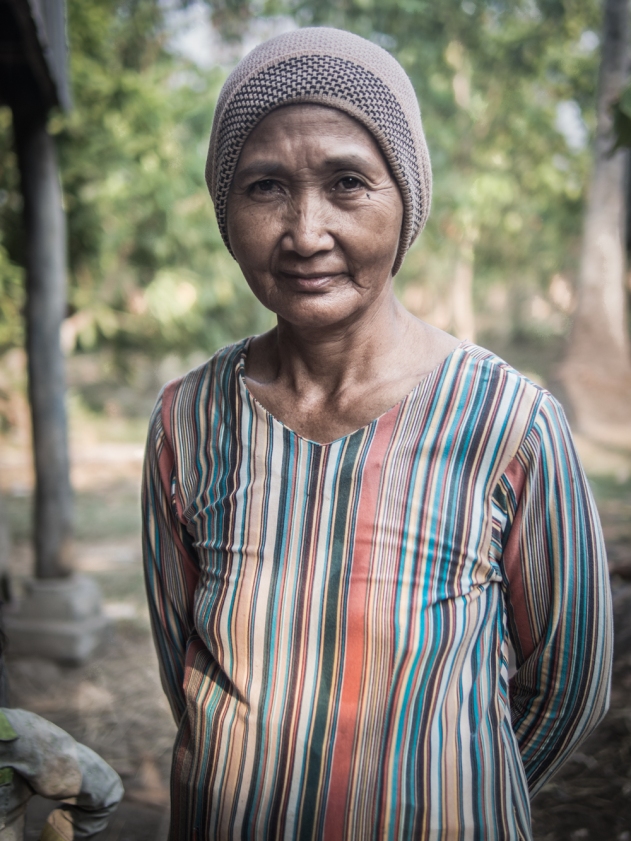 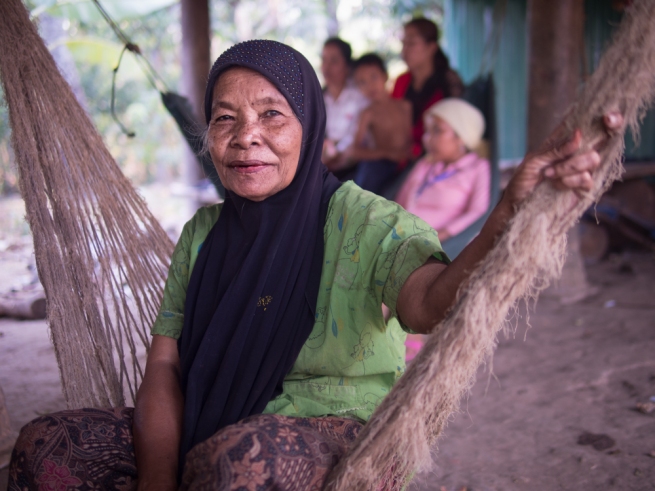 I put forth the proposition of another buffalo portrait to the group. Five minutes later, ‘Buffalo Boy’ rounded the corner.

I returned a couple more times with the portraits, this time with ace photographer Scott Rotzoll. I met Scott in Korea where we’d both lived for a number of years, and whom was about to begin a stint of living in the Cambodian capital of Phnom Penn. Scott also made, printed and returned portraits.

Aside from the village, we took many portraits around Kampot in other Muslim villages and the salt fields where workers carry heavy loads of evaporated piles of sea crystals to nearby storage sheds.

I bumped into an acquaintance in the very same spot that i’d seen him two years prior, so came back with his portrait from the first time we’d met. We shared a coffee and communicated in mine and a friend’s broken French. 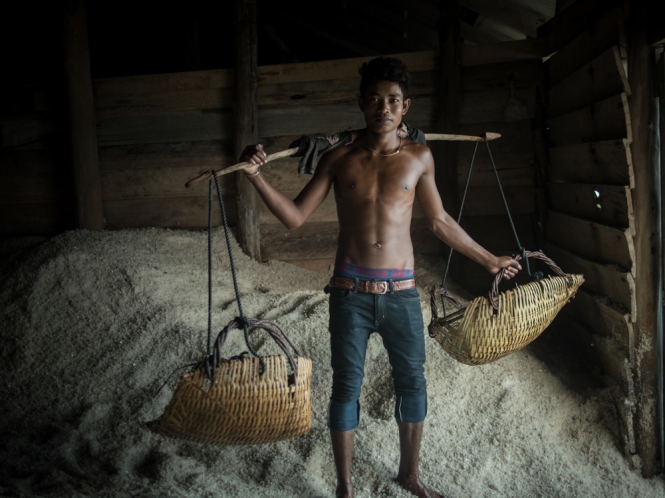 Until next time, Kampot.

4 replies to “Return to the Land of the Buffalo”