Back in Japan. A week doesn’t seem enough time. It is. If you do it right.

The ancient capital of Japan is thankfully underrated. With seemingly more free-roaming deer than tourists, our accommodation was  reminiscent of an old samurai film, a century-old building with a zen garden at the center.

The Shinto religion tells that everything has a spirit, from trees to animals. The deer that inhabit Nara are thought to be guardians from the spirit world. I’m sure i read that somewhere.

Korea-based expat blog Kimchibytes noted that on his trip to Nara he felt like the lead character, Link, in the Super Nintendo classic Legend of Zelda 3: A Link to the Past. Only one of my favorite games of all time. This excited me.

Nara is Zelda come to life. From the huge, ancient temples and mystical forests , to the weathered, wooden houses. I had the game’s soundtrack in my head the whole time i was there.

The furry protection racket demand treats for their duty. The baby below was a constant source of harassment to the ice cream lady. Do deer even like ice cream? 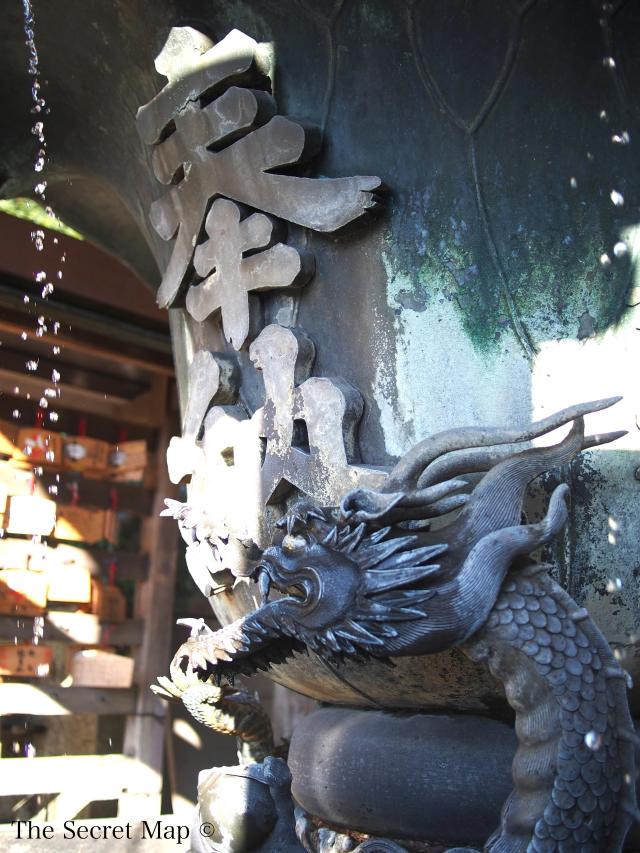 Osaka: From the past to the future, we arived at Umeda, the business district of Osaka, and checked into a capsule hotel for New Years Eve. Comparable to a 1970s vision of a giant spaceship, or an endless set of microwave ovens. The most expensive accommodation of the trip only served us with one hour sleep, but is a quintessential Japan experience. 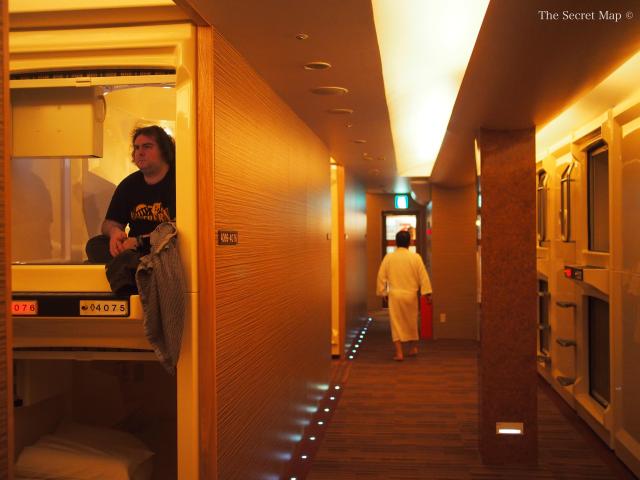 The Shinsekai area of Osaka gave us a rough greeting.

Tired and hungover, we proceeded to get misdirected around what we discovered to be the most unscrupulous neighborhood of the city. Had the zombie apocalypse begun? It seemed every homeless, mentally retarded and alcoholic chap in Japan was sent to roam the streets as we haplessly searched for our hotel. 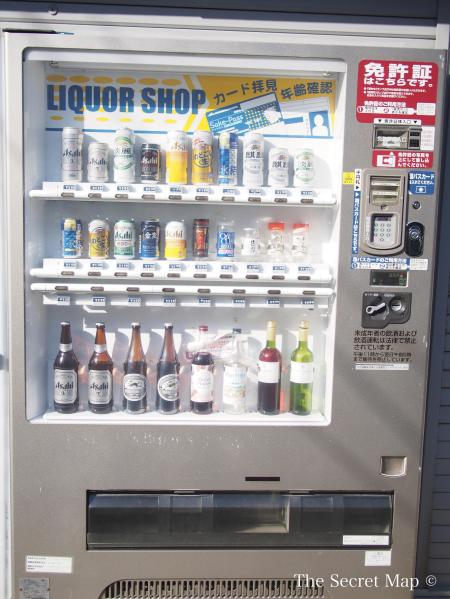 We learned that we were staying near the red light district, Tobata Shinchi. The above picture shows a typical layout of a booth. A girl in custom attire (nurse/schoolgirl/bookworm) will sit among cartoon-themed cushions, while her elder female haggler will strike the deals from the edge of the doorway.

Tobata shinchi is expansive, police guard every corner, and it is a must-see for anyone, locals and tourists alike. 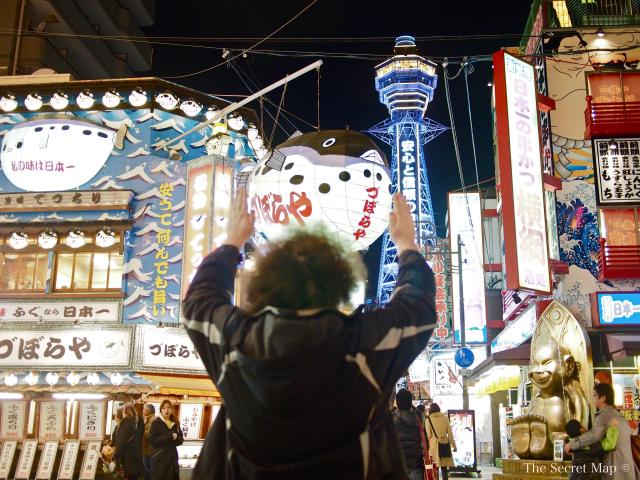 If you take a 180 degree turn from the hookers and homeless, you start on a neon-lit path of the biggest stretch of entertainment that surely exists anywhere in the world. The sensory-overload of a walk from Shinsekei to Shinsaibashi at night brought on a headache due to the mixture of high-pitched “moshi moshi” from store girls and seemingly never ending visual assaults from all angles.

Amongst the chaos, just off the divide of Dottonburi and Shinsaibashi is Amerikamura, where Osaka’s U.S. hip hop-influenced youth come to buy into the dress code of an 80s New York rapper. In one of the more authentic hip hop record shops, i found a jacket which i thought my youngest students would die for. They are obsessed with ninjas and the cutsey nickname/insult i throw at them is ‘crazy bees’. The store sold a jacket that read: “Attack Like a Samurai, Kill Like Crazy Bee”. Turns out that this excited me a lot more than them on showing them the picture. 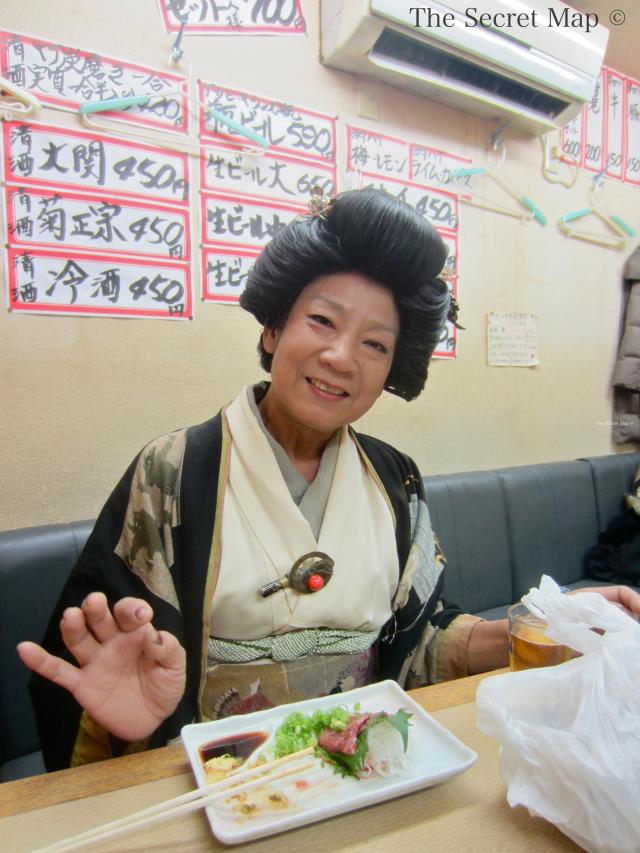 The three shots above were taken from the most interesting karaoke bar i’ve had the pleasure to embarrass myself at in Asia. I’ll just let your imagination do the talking with this one.

Ordering on the telecom was a first, as our new friend Yoko showed us the delights of fried anything-you-want on a stick, or kushikatsu.

Above is the tantalizing Takoyaki, aka octopus balls, another Osaka specialty.

Below is the Okonmiyaki, this one from Kyoto, and was every bit as delicious as it looks. Your mouth is watering now, right? 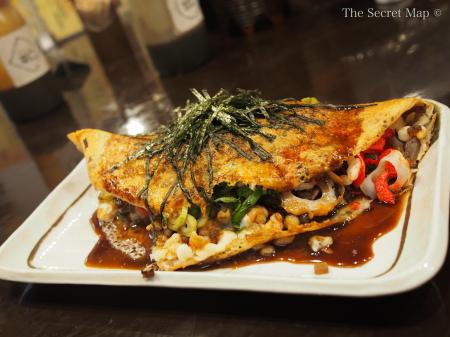 My return to Kyoto delivered cosplay, monkeys, and this dapper cape an hat-donned gentleman.

Needless to say, there’s a lot on offer in Japan.

Even if you have only a wee while to spare.