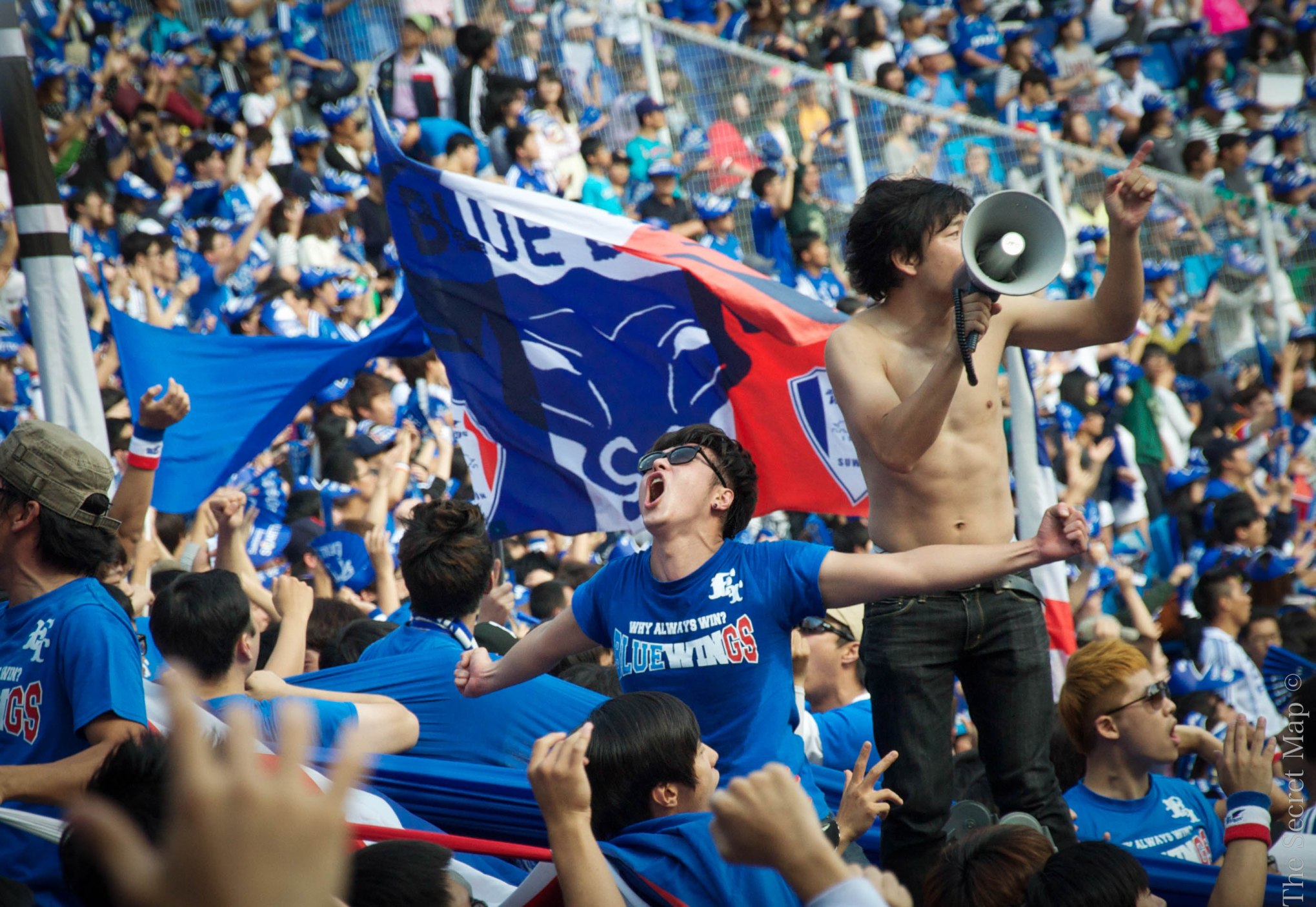 “You can even say the Samsung chairman is more powerful than the President of South Korea. Korean people have come to think of Samsung as invincible and above the law.”  Woo Suk-Hoon, Author.

South Korea is a corporation nation. The most common ambition to aim for here  is to work for a large organization such as Samsung, SK or LG. The central role that these export-driven businesses have in an individual’s life here is partly responsible in changing the fortunes of Korea’s economy to being on par with Afghanistan in the 60s to being part of the G20.

In the Far East, a corporation is an extended family. After joining  an organization straight from university, young men here usually stay at the company for life, climbing the ladder and spending more time with work colleagues than their own family.

Businessmen frequently return home around midnight – if at all, in some cases.

Brand logos in sport are ubiquitous around the world. From the sponsors’ brand name on team shirts, billboard advertising, post-match interview booths and attached to the names of leagues and tournaments.

Purposeful exposure is advertising and spectator sports are fueled by it.

South Korean sponsorship takes branding one step further.  The names of their sports teams are typically that of their corporate owner. This is because the teams have been owned by these companies since their inception. 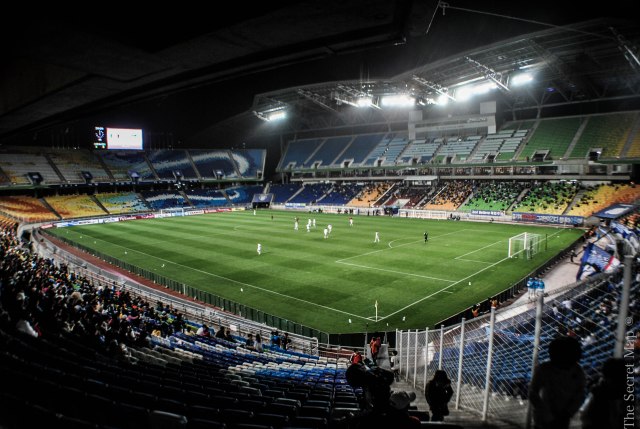 Suwon is a city a little south of Seoul. Samsung is the city’s biggest employer.

On weeknight Asian Champions League nights, the majority of the stands are mostly empty. 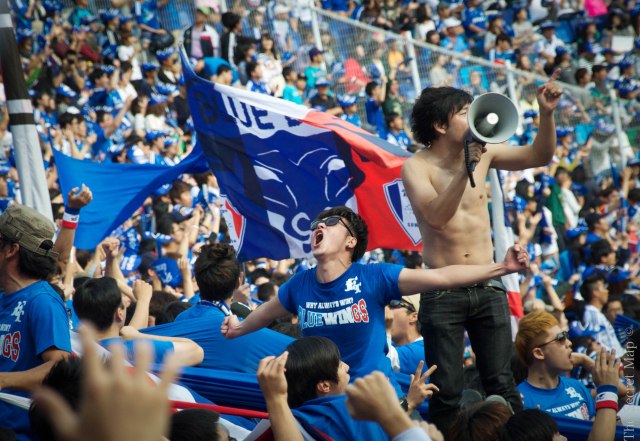 However, the megaphone wielding crowd dynamos, rumored to by funded by Samsung, is enough to get the Bluewings hardcore toward a sufficient level of rowdiness. Rumors though they are, it would make sense as these crowd-rilers barely spend any time watching the game itself.

The celebratory player above, Bluewings’ former Yugoslavian center half Mato Neretljak, is one of a handful of predominantly Brazilian foreign investments continuously rolling in on the back of Samsung’s allowance over the years.

The five teams that started the league were named The initial five clubs were Yukong Elephants, POSCO Dolphins, Daewoo Royals, Kookmin Bank FC and Hallelujah FC, the latter of which belonging to a Christian organisation. 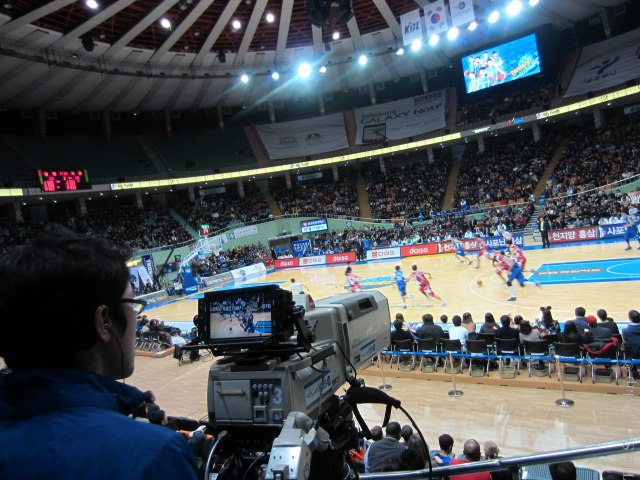 Basketball is a simple enough game to understand, so Korea likes to bring out a plethora of visual and interactive stimuli. Between quarters the hordes of logo waving spectators will be cheering along a dancing Samsung phone, or perhaps a cartoon-like figure with a branded ramyen bowl for a head, all the while cheering for their team, which, of course, is this instance is “Samsung!”.

This is advertising on just on steroid, but on Heisenberg grade crystal meth.

The best ingredient in this chemistry, however,  are the pom pom girls. 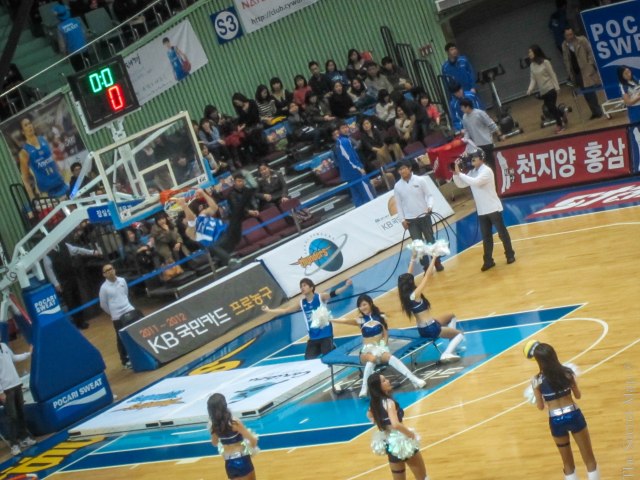 It’s worth coming for the side shows alone. 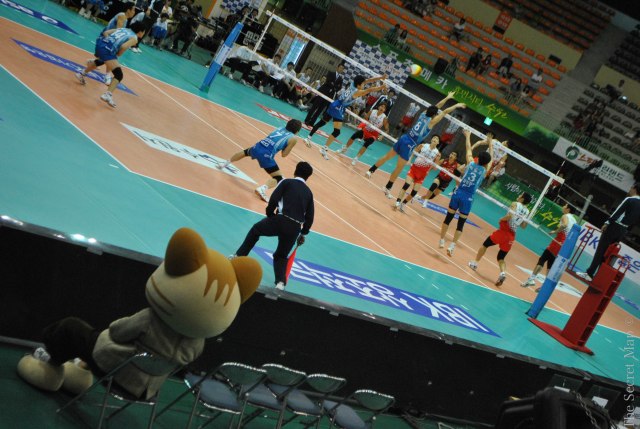 At a volley ball match in Suwon, i was presented with the opportunity choose between rooting for Seoul Woori Capital Dream Six or Incheon Korean Air Jumbos. 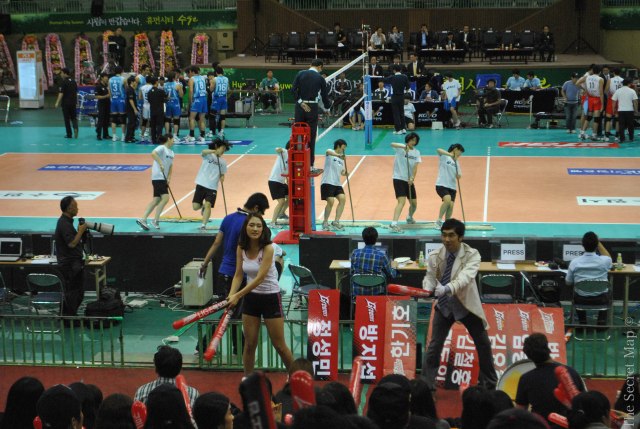 Basically, a bank or an airline. Fresh off the boat and initially naive, it didn’t take me long to realize that i wasn’t witnessing an uncharacteristically athletic group of salarymen.

In the end, i sat closest to the best source of crowd motivation.

Obviously, a home team’s location will go far towards supportive leanings, but here in Korea, the corporate tag is equally influential.

What choice to make when person’s local team are his company’s biggest rivals? Does it fall on childhood favoritism or does one adopt  their adopted side?

What of the players? Do they care about their fans and the club’s seemingly  hollow heritage?

Maybe some, but 2012 saw 11 players from the Korean Volleyball league hit with lifetime bans in relation to match-fixing. 2011 saw almost 50 footballers from the K-league also banned for life, resulting in a hotel room death accompanied by a match-fixing-related suicide note.

Investigations have now begun for other sports, such as baseball, basketball and, more bizarrely, Starcraft tournaments.

Does that concern us, the casual observer? Does it affect us? Aren’t sporting events just a good excuse to get drunk with your friends, shout an equal amount of abuse at highly-paid strangers, and soak up whatever drama occurs both on-field and off only as entertainment?

One thing is for sure: the ever increasing flow of cash getting pumped into sports means that there will be no shortage of dramatic roller coasters for the corporate hordes to ride.

Like any ride though, it’s probably best to let go and enjoy it.

After all, it’s just a load of balls.